Live your life - 1. The Origins 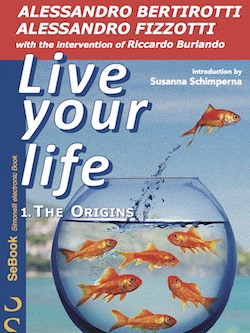 DESCRIZIONE
A particular tale, lively and captivating to be read from cover to cover without any interruption. In an atmosphere emphasized of pathos you live between one emotion and another one indirectly without a real space to get your breath back. The spaces used in an innovative way give to the tale a quick but complete deeping of the psychological state of the moment. However, these reflections do not slow down the events: they are perfectly part of the story.
A well-choosen idea is not to stop the tale on long descriptions of the characters giving them a deep characterization in any case. A complete tale that suggests some hiden clues here and there, impossible not to be noticed also by the most thoughtful reader who can perceive in this way the intention of the writer of giving a future to the characters described.

Alessandro Bertirotti was born in 1964. He qualified in piano at the State Music Conservatory in Pescara. He got his degree in Pedagogy at the University of Florence. He is professor of General Psychology at Genoa University, Politechnic School, faculty of Architecture. He is vice secretary general of UNEDUCH (International Education Charter), NGO (Non Govermental Organization) at UN and European Parliament. He is member of Honorable Academia Mundial de Educación, situated in Buenos Aires and member of the scientific committee of Officine Grandi Esperienze of Turin, that look after neuroscience, art and cognition fot the development of the person. He is member of the Swiss Order of Odd Fellows, in Zurigo.

Alessandro Fizzotti host and radio speaker, announcer and producer of popular radio formats. Thanks to his professionalism and lively power of entertainment, he lent and he still lends his voice for several ads, conventions and company events, store promotion and commercial animation activity.

Riccardo Burlando was born in 1959. he got scientific school-leaving certificate. He left the university and he worked in different fields. He came to a multinational where he improved his career becoming an administrative manager of the offices for Italy. Passionately fond of his family, nature and sport like Motocross, Go-kart, Beach Volley and Football. He loves reading and he is trying a new challenge: crime and horror tales writing.
Guida ai formati ebook
Ebook in formato Pdf
Ebook in formato Epub
Ebook in formato Palm
Ebook in formato Lit
Ebook Ex Libris (formato cartaceo)