Blonde and Bejewelled - The Professionalism of a Queen: Margherita of Savoia 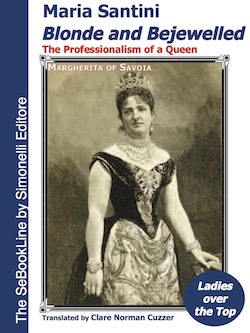 DESCRIZIONE
MARGHERITA AND DIANA.
NOT SUCH AN IMPROBABLE COMPARISON

At first sight Margherita of Savoia, the first Queen of Italy and Diana Spencer, Princess of Wales, have nothing in common, apart from their aristocratic birth. The first was a 19th century Queen, who reigned for twenty two years and then was Queen Mother for twenty six; the second, through her own choice did not become queen. Even if she had not died tragically she would never have ascended the throne since she definitely wished to divorce her husband, Prince Charles. Margherita descended from parents and relatives who were first cousins; she was almost pretty but she knew how to make the most of herself and became a leader of fashion and elegance. Diana was the perfect English rose who charmed the whole world.
The two women do have a formidable point in common, though. At a very young age both married the heir to the throne of their country: Margherita married her cousin Umberto who became King Umberto I of Italy; Diana married Charles, Prince of Wales who is still the heir due to the longevity of his mother. These two women are united by an essential fact : both of them married a man who, long before they became members of the royal family , had given his heart, for ever, to another woman.
When Umberto of Savoia married Margherita , the famous, very beautiful Countess Litta had been his mistress for years. The fact that she was seven years older than him is immaterial, as heir and then King he was still her lover, even when she was ageing. The bullets of Gaetano Bresci put an end to their love. About Diana and Camilla we know everything, perhaps even too much.
Where Margherita and Diana differ is in their reaction to the bitter realisation that they had an unbeatable rival. They reacted in ways that reflected their times and their character. Margherita lived in the 1800s and if, initially ,she did think of leaving her unfaithful husband she became resigned to the fact. She was the First Lady in the Court and invented a life in which she could cultivate her own interests and amusements, from promoting artists even to mountain climbing, but she had much to tolerate too. Diana was a girl of our own times who absolutely wanted to end her marriage which she defined as crowded. She not only obtained her divorce but also never missed a chance to criticise the Royal Family.
Margherita died of old age and, alas, a convinced Fascist. Her funeral was impressive but certainly nothing compared to Dianas which was a true apotheosis.
Guida ai formati ebook
Ebook in formato Pdf
Ebook in formato Epub
Ebook in formato Palm
Ebook in formato Lit
Ebook Ex Libris (formato cartaceo)